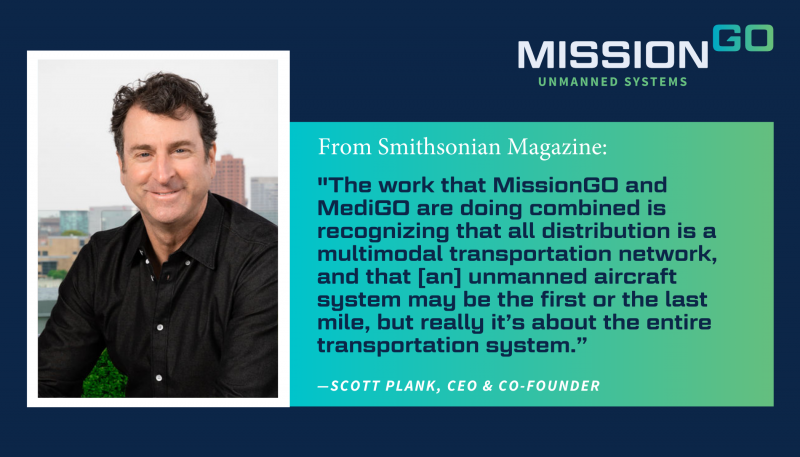 The Maryland-based firms MediGO and MissionGO seek to optimize the organ transplant process through drone delivery. MediGO is led by co-founders Scott Plank and Joseph Scalea, while MissionGO is led by Plank and company president Tony Pucciarella.

Reducing the amount of time an organ is without blood supply means its tissues are better preserved. Drone flights themselves, in which the organ’s properties such as temperature and pressure are monitored, may actually be safer than usual aircraft transport.

MediGO is focused on the logistics of organ transport, examining how to establish an informed and transparent process from when an organ procurement organization sends out an organ to when transplant centers receive it. It also works to understand which modes of transport are best for various types of organ deliveries, and has so far been involved in hundreds of deliveries, according to Scalea.

“There’s a lot of friction in the system that exists between the donor and the recipient, and MediGO is going to reduce that with communication, data and transparency,” says Scalea, who is a transplant surgeon at the University of Maryland Medical Center. “We have translated the science and commercialized that into services that can really help human beings get bett

MissionGO, which operates as MediGO’s sister company, develops and operates the technology that is used for drone-based organ deliveries. The company works with localities and the FAA to provide safe and effective flights.

Plank, who has worked in logistics and resource management, believes that electric unmanned aircraft will define the future of delivery.“The work that MissionGO and MediGO are doing combined is recognizing that all distribution is a multimodal transportation network, and that [an] unmanned aircraft system may be the first or the last mile, but really it’s about the entire transportation system.”